Can you use taekwondo in a street fight?

One of the favourite questions of the proverbial ‘man on the street’ is whether a certain martial art would be useful in a ‘real fight’. Taekwondo, with its popularity among all genders and age groups, plus its standing as an Olympic sport, is often singled out as ‘pointless’.

However, the people who say that have already missed the point of taekwondo in the first place: fun, fitness and self-improvement. Taekwondo is not about fighting, in the same way that car racing isn’t about becoming a getaway driver.

In this article, we’re going to look at some of the most common points around taekwondo and its relationship to the fights that happen in the real world. We’re also going to try to demystify what a street fight really is. 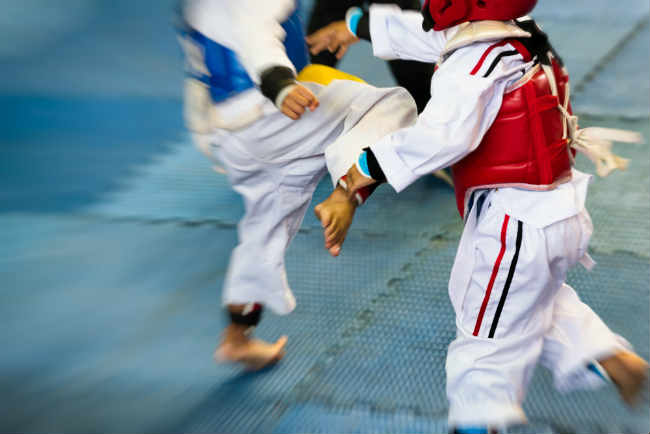 Understand what street violence really is

Violent street crime in Australia – such as muggings – is rare. The fighting on the street that does happen is usually unexpected, unpredictable and not premeditated. The most common form is an abrupt punch-on between drunk young men on a Saturday night.

Whether entirely unprovoked or brewing for a while, this sort of fight is usually a split-second matter. If it is inside a venue, security will break it up in seconds. If it’s outside a venue, there are so many factors around setting, size of groups, bystanders, physical condition of those involved, use of weapons (including improvised) and so forth that the only broadly effective self-defence skill is situational awareness. Whatever skills someone has won’t usually matter.

Does taekwondo work in a fight?

Taekwondo is a sport. Self-defence is physical safety skills. So, while some of taekwondo skills can be applied to self-defence, the two are separate. In answering this question you have to consider what your fighting objective is anyway.

We’re going to assume you are never the attacker or intentionally provoke street violence. Thus, your goal is safety for yourself and those around you, meaning any street fight will begin with you defending.

Taekwondo includes many techniques – such as blocking, dodging and footwork – for defending or evading the attacks permitted within the sport’s rules. These techniques can be effective in defending yourself if you’re caught in the chaos of a street fight, but they were not designed that way.

If you are primarily interested in self-defence, get in contact with us and we can advise on what would work best for you, because it is definitely not the sport of taekwondo.

Should you even get in a fight?

No. All of the world’s best martial arts instructors, the most highly trained special forces soldiers and the most elite combat sport athletes will tell you the most effective self-defence technique is avoiding a street fight however you can.

Professional trainers all regard running away as the single best self-defence technique. This would make Usain Bolt the world’s best street fighter. However, there are rare times when standing your ground – such as defending someone who cannot flee – is necessary. Even in this case, your goal is to use the safest means available to end whatever conflict has already occurred.

All that said, the simple fact is: if you get into a street fight you’ve already been beaten tactically. Your only goal is to not compound your tactical failure by getting beaten physically.

Is it legal to use taekwondo skills if you’re attacked?

Yes, with a but… While there are a lot of mitigating clauses, the general rule (and this is not legal advice from United Martial Arts) is that in self-defence you can only use reasonable force appropriate to the threat.

What this boils down to is that the force you can use must be the same as as what an ordinary person facing the same immediate dangers would use.

Taekwondo presents an interesting situation here. With its acrobatic kicking techniques, taekwondo offers perhaps the longest range of all full-contact martial arts. This means that you are more likely to be able to strike your assailant before they can strike you. The law is quite clear though that matters are not considered self-defence if you act as an aggressor.

Taekwondo is really about sport and health

Where martial arts are either about health or healthy competition, a street fight is, for want of a better word, dirty. Any tactic might be used, there generally no winners and even the drunkest bar brawler will likely not pick on someone his or her own size.

Yes, there are many classes specifically about self-defence training and they are highly useful, but they are not ‘martial arts’ classes as such.

So you have a choice. If you want to practice an enjoyable, high-tempo sport , then taekwondo (or any other martial art) is a great option. It’s not ‘pointless’, because the point is fitness and fun, not fighting.

If you want to know how to handle yourself should something drastic happen, then a self-defence class really can be a lifesaver. The two pursuits just can’t be taught in the same way at the same time.

To find out more, get in contact with United Martial Arts. We’ll be happy to answer all your questions and queries.