1. Where did Taekwondo originate?

Taekwondo is a combat sport originally from Korea. This type of martial arts style dates back to the 1940s and 1950s. It was developed by Korean martial artists that were well versed with other martial arts styles like Karate, Gwonbeop, Subak, Judo, Taekkyon, and Chinese martial arts. Some of the disciplines that influenced the development of Taekwondo are over 2,000 years old.

The earliest mention of Taekwondo was around 50 B.C. when Korea was ruled by kingdoms — Paekche, Silla, and Koguryo. It was first practised by the Koguryo kingdom as Taekkyon or Taekyon, but spread by Silla kingdom thanks to their Hwarang warriors.

Taekyon was a form of self-defence art that mainly featured kicks, throws, hand strikes, and joint locks. The art was later renamed to Subak in around 668 A.D To 935 A.D. It initially served as a fitness system but was developed to a fighting art that was taught to the public. However, it didn’t generate enough interest.

The art was revived by Korean martial artists after the end of the Second World War. They practised it along with other self-defence systems.

2. What is a Taekwondo uniform called?

Practitioners of Taekwondo wear uniforms known as dobok. Do means “way” and Bok “clothing”. Most of the Taekwondo uniforms are a plain, white, v-neck top similar to a jacket and pants with an elastic waist. The top is designed to be open in the front and practitioners use a belt to tie it together. 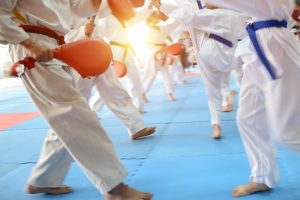 3. What is a Taekwondo instructor called?

When referring to a Taekwondo instructor, you use the term sabom. An assistant instructor is called busabom. Avoid using the term “gyosa”, which means teacher. Some practitioners also have a habit of calling their instructors “sensei”. Well, sensei is a Japanese term often used in Karate, not Taekwondo.

4. What are the belt levels in Taekwondo?

Like most martial art systems, Taekwondo also makes use of the belt system to rank practitioners depending on their skill level. The belts are differentiated by colour.

Here are levels in Taekwondo at United Martial Arts.

5. Can I start Taekwondo at any age?

Both adults and kids can sign up for Taekwondo classes. However, for kids, they’re generally considered ready to begin training from the age of 5 or 6. At this age, kids have the ability to understand concepts and follow instructions to maintain a reasonable focus for effective training. Contact us today for two free classes to see if your kids will love TK as much as we do!